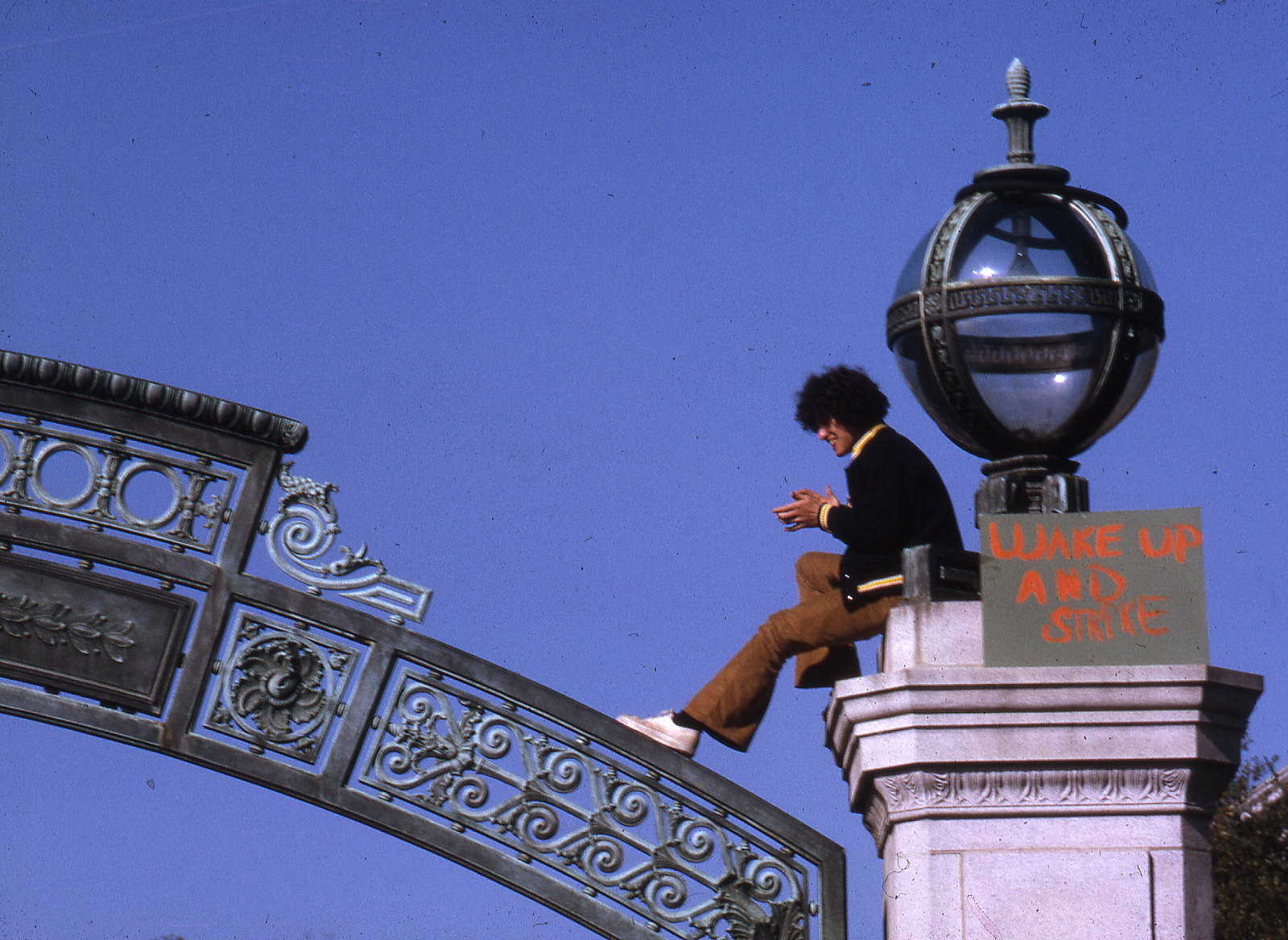 DeCal has had a long and varied history – we were rooted in the ideals of the Free Speech Movement, and then shut down a few times before coming back with a vengeance. Don’t worry, we’re here for good, and this time line is a testament to our resilience.

1964: Free Speech Movement erupts in the Fall, following the chancellor’s and vice-chancellor’s rescinding of the Sather Gate Tradition of political advocacy on city property adjacent to the university.

1965: The "experimental program," founded by Philosophy Professor Joseph Tussman. Undergraduates and faculty engage in intensive reading and discussion of texts in an ungraded environment.

1966: Special Select Committee on Education final report issued. The SSCE was chaired by English Professor Charles Muscatine, and a draft version of the report suggested a “General Studies Council” be established which could “receive and implement student proposals for ad hoc courses on subjects of current serious interest.” The final version of the report toned down its more controversial recommendations but did propose the creation of the Board of Educational Development.

1966-67: Board of Educational Development (BED) established by the Academic Senate based on Muscatine (SSCE) report recommendation. Its charge: to “stimulate and promote experimentation and innovation in all sectors of the Berkeley campus,” and to initiate and approve of experimental courses “for which neither departmental or college support is appropriate or feasible.”

1967: Center for Participation Education (CPE) founded, an ASUC-sponsored student group whose primary activities included developing courses and helping other students to do so. Rick Brown, a founder, had just left San Francisco State University, where he had been involved in an evaluation of the Experimental College there.

1967-68: In careful collaboration with BED, CPE helps establish a number of student-initiated courses.

1968: Student-initiated class, entitled Social Analysis 139X: Dehumanization and Regeneration of the American Social Order, guest-taught by Eldridge Cleaver, Minister of Information for the Black Panther Party, ignites a controversy which eventually leads to a tightening of restrictions on student-initiated classes.

1969: BED’s authority to authorize courses rescinded by the Academic Senate, which recommends the creation of the Division of Experimental Courses (DEC) whose course approval procedure would more closely follow the existing Senate rules.

1970: No faculty named to replace the outgoing BED chair; no founding chair named to the DEC; both entities cease functioning soon thereafter; with no body granting course credit, CPE no longer can offer courses for credit.

1981: Chautauqua – A Center for Democratic Education, a student group, founded; published a magazine and catalog describing several student-initiated classes it was offering.

1985: student group named shortened to DeCal, or Democratic Education at Cal; primary function narrowed to the facilitation of the offering of student-initiated courses.

1985-1995: number of courses steadily grows from ten to more than forty per semester; DeCal continues to publish a printed listing of student-initiated courses.

1997: student-initiated course listings move to web; in the next five years the number of courses offered jumps from fifty to more than a hundred per semester.

2002: controversy surrounding Daily Cal article on Male sexuality course sparks formation of Special Studies Task Force; findings ultimately support the integrity of student-initiated courses but recommend the strengthening of faculty and staff support of them, including the creation of an office which would provide pedagogical training and resources; following the issuance of the Task Force report, Undergraduate Course Facilitator Training & Resources established at the Student Learning Center. An analysis and assessment of the controversy can be found in The Possibility of Abuses section in DeCal Retrospective.

2003: Special Studies Working Group continues the work of the Task Force and in January issues a report recommending, among other things, the establishment of student, faculty, and department chair checklists to describe procedures and recommendations; an informational web site; a Course Proposal Form clarifying faculty mentorship and oversight, and strengthened supervision, training, support, and acknowledgment of faculty and students involved in these courses.

2004: With the work of the DeCal Board, ASUC funding returned. Today DeCal offers 120 classes with over 250 course facilitators and 4,000 students enrolled in a student-initiated courses.

2005: Expansion of DeCal program to other universities begins, encouraging and supporting student initiated courses at other UC’s as well as the University of Pennsylvania, Oberlin and Stanford. In the Spring and Fall of 2005, DeCal celebrated its 25th anniversary.

2006: In spring, the facilitators of Poongmul I: Introduction to Poongmul DeCal charged their students to pay for an outside instructor (their syllabus says it’s for the “cost of instruments and the required course reader”) and alarmed Wanda Mar, the Principal Budget Analyst who sits on the Course Materials Fee Committee, and other campus officials. No matter what the fees go for, though, the class is not supposed to charge any since a fee request should have been made and approved under exceptional situations a year before the course was offered. [Editor’s note: This post is in no way meant to reprimand Poongmul I facilitators but should be used to show the failure to communicate University policies to facilitators, an enduring problem that must be addressed.]

2006: In early summer, the the Academic Senate’s Committee on Courses of Instruction adopted a new procedure for student-facilitated group study (98 and 198) courses, in consultation with Vice Provost for Undergraduate Education Christina Maslach. The deadline for submitting course proposals to COCI will be one month before the end of instruction in the preceding semester (or summer), effective as of Spring 2007 whereas in the past, the submission deadline was largely up to the departments. The new decision will allow the administration to have more time to review and monitor DeCal classes. It should help prevent some habitual problems with DeCal classes, such as the unauthorized levying of course fees.

John Hurst, who kept the program alive back in 1980 (and still advises us today) has this to say:

In the fall of 1980 CRS offered a course called Education for Democratic Action that I developed in collaboration with a small group of CRS students. The class had two sections. I worked very closely with one of the sections, whose students had developed a mission to create a student-run center to promote democratic education on campus. It was a vision I had been nourishing for several years. By the spring quarter of 1981 we had created an organization called Chautauqua-A Center for Democratic Education, which published a magazine and a catalogue that described a number of student-initiated classes whose offerings it was coordinating. Chautauqua also sponsored workshops featuring distinguished democratic educators like Myles Horton.

In June 1981 the ASUC Senate accepted Chautauqua as a student-run ASUC operation. In a few years the name was changed to Democratic Education at CAL or DeCAL, so its name would clearly reflect its purpose and have meaning for students. By 1985 the function of DeCAL had narrowed to the important task of facilitating the offering of student-initiated courses. An extensive source book was published that dealt with all the details of creating a class, obtaining a faculty sponsor, and the discussion and promotion of a democratic pedagogy.

DeCAL continues to flourish today as an outlet for serious and creative students who wish to add to the campus offerings. Each semester some 30 to 40 student-initiated courses are offered for credit. Almost all of them rapidly fill to their maximum enrollment. I frequently hear students say that their DeCAL class was the best course they ever took at Berkeley. Many courses initiated by students through DeCAL have gone on to become regular courses offered by faculty in various departments on campus. DeCAL is perhaps the best known and most well respected of all the 21 Student Initiated Service Groups approved and funded each year by the ASUC Senate. Many of my advisees, both undergraduate and graduate, have been directors of DeCAL over the years, including this academic year. (from http://www.nl.edu/academics/cas/ace/resources/johnhurst.cfm)